Bones are made principally from a combination of the protein collagen (30%) and the calcium-based mineral hydroxyapatite (70%). Inadequate production of the mineral portion of bone can lead to soft bones, a condition called osteomalacia. The usual cause is a deficiency in vitamin D, which is required to absorb calcium from the diet. Vitamin D can come from foods such as fish, liver, mushrooms and eggs, while breakfast cereals and margarines are often fortified with vitamin D. Vitamin D can also be made in the skin on exposure to the ultraviolet radiation in sunlight.

The femur in the above picture shows osteomalacia in an adult. The bone is curved and weighs less than normal and the front surface indents when pressed with the fingers. The curvature is not extreme and the condition would appear to come from osteomalacia developing from a deficiency during adulthood. Symptoms often begin with a low-level ache in the bones, spreading to joint pain and muscle weakness, with susceptibility to fracture often being an early warning of bone-softening. Without treatment, this can progress to bending of the bones and in the case of the vertebrae in the spinal column, their compression, which leads to a reduction in height; walking can become difficult.

The below image is of a complete skeleton and is more extreme. It comes from a woman who suffered from rickets. Rickets is the form of osteomalacia that occurs during childhood, where there is deficient mineralisation at the point of growth in the bones. The long bones of the arms and legs here show severe deformity, with bowing of the tibia and fibula and stunted growth, which is characteristic of this condition. 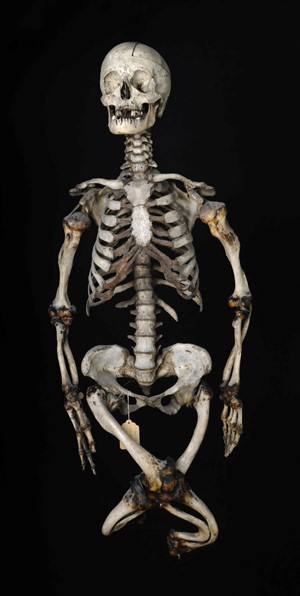 Both of these specimens come from Scotland in the early nineteenth century, when vitamin D deficiency leading to osteomalacia was a major problem due to a number of factors. Scotland is a country with low levels of sunlight and prior to the Clean Air Act of 1956, soot particles in the air from burning coal attenuated the sun’s ultraviolet rays. Amongst the underprivileged, poor diet and the tendency of people in poverty to be living in crowded conditions that would be mostly shaded would also have contributed. Fortification of foods with vitamin D in the 1940s led to a drastic drop in the incidence of both rickets and osteomalacia.

Today one in five people in the UK are said to have low vitamin D levels, and treatment is usually through a supplement of the vitamin either orally or by injection. It is recommended that everyone should take a daily supplement containing 10 micrograms of vitamin D in winter, and all year round if they have low exposure to sunlight.